Microwaves are part of the non-ionising electromagnetic spectrum, falling between 300MHz and 3GHz.. That is, they are waves of electrical and magnetic energy radiating out from a source and travelling together through free space at approximately 300 million metres per second.

The electrical and magnetic components of the wave, move perpendicular to each other and perpendicular to the direction of propagation. This type of electro-magnetic wave (EM wave) travelling in air is known as a Transverse Electro Magnetic wave or TEM wave. See Fig.1. below: 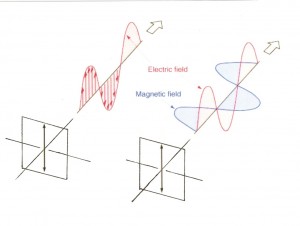 In the case where the planes of the two oscillating EM components remain constant, the wave is linearly polarized.

The above diagram shows a vertically polarized wave.

There are other modes of polarization, including circular and elliptical. Here the planes rotate as the wave is propagated.

Where an instrument is used to measure the power flux density of an EM wave, its response to the polarization of that wave becomes important, particularly if the power level of the wave is sufficient to cause injury. However, more of this later.